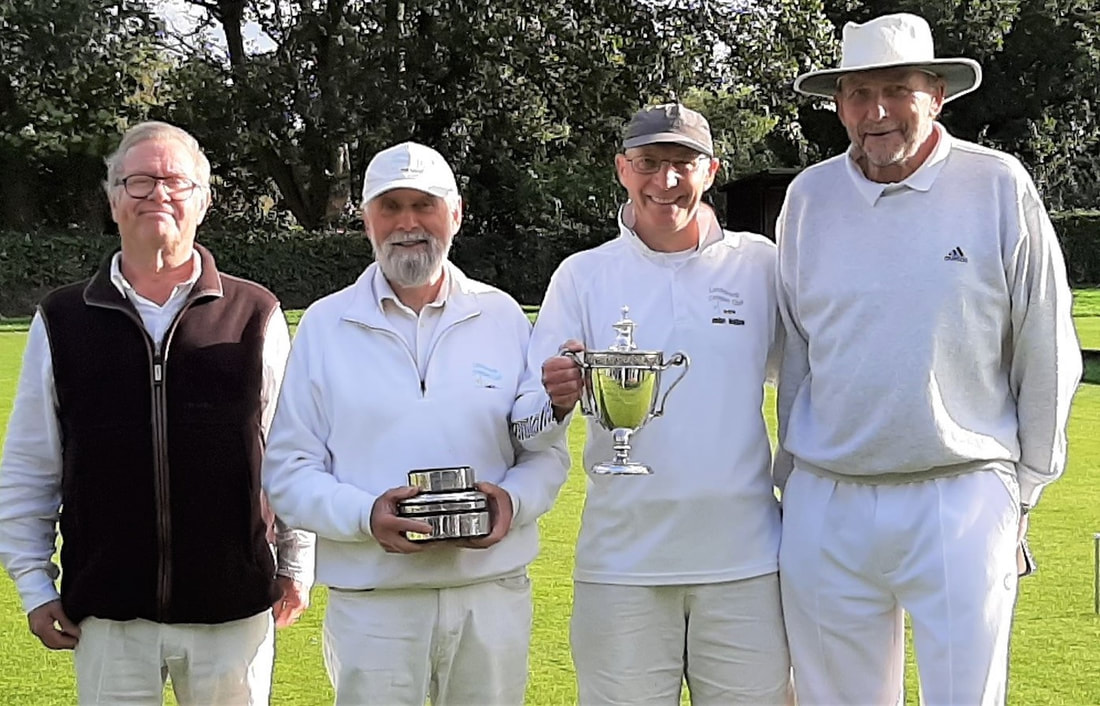 Victory for Letchworth in the Longman Cup

Letchworth, St Albans, Chester and Sussex made it through the early knock-out rounds to reach the finals of the Longman Cup, this year hosted by Surbiton, 5-6 October.  Letchworth fielded the same four who had played together in all earlier rounds: Colin Davies, David Mathews, John Noble and Jeremy Scott.  Letchworth secured their place in the Final by beating Chester 4-3 in the Semi-Final on a dull, but dry Saturday.  Unfortunately, Sussex proved too strong for St Albans who were ultimately unsuccessful in making the Final an all-Hertfordshire contest.  Saturday night saw constant rain and the Letchworth team arrived at Surbiton on Sunday morning to find much of the playing surface underwater.  The forecast had improved overnight and suggested little more rain, but play was able to start only after several hours hard work by the Surbiton grounds team and then on only three rather than six courts.  A truncated format of the game (known as 14-point croquet) had to be played in order to accommodate all the matches within the day.  After the delayed start Letchworth soon eased ahead 1-0, by lunch had a 2-1 lead, and only an hour later two quick wins had secured the match 4-1.  The remaining two singles were played in a mixture of bright sunshine and squally showers and the games shared to make the final score 5-2.  The trophy was presented to John Noble by Quiller Barret, President of the Croquet Association.  The Longman Cup has a long history and the impressive piece of silverware was first competed for in 1929, Edgbaston being the winners that year.  Letchworth last won the trophy in 1989.

Two more Club Finals matches have been played.
Congratulations to John Noble who beat Hugo Jeune in GC Handicap
and to Janet Mathews and Andy Kennedy who beat David Gough and Paul Gilbert in  GC Doubles 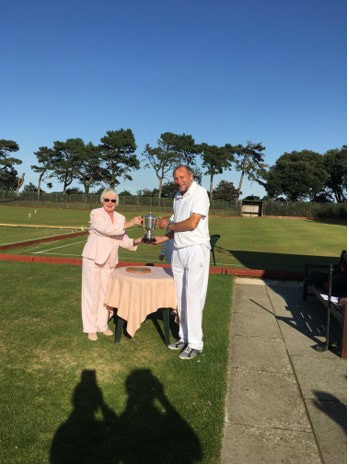 'Yesterday I won the All England AC Handicap Played over two days
in sunny and very windy (on Saturday) Hunstanton, also getting a silver Merit award along with a handicap reduction, (now a 7). Players came from Edgbaston, Camerton & Peasedown, Chester, Reigate Priory, Kingston Langley and Royal Tunbridge Wells, with Handicaps ranging from 2 – 16.
There were 8 people playing in the final with winners playing winners. I won 4 out of my five games, with a
3 way tie for second place.'

Congratulations to our new National Champion!

Another win in Longman Cup!
Letchworth beat Nottingham 5-2 in the last of the national knock out rounds to proceed to the finals of the Longman Cup in which the final four teams will fight it out at Surbiton, 5-6 October.  The morning session ended 2-1 as Jeremy Scott and John Noble chalked up good wins +12 and +21, with the Nottingham pair taking the doubles +6 after a long struggle with David Mathews and Colin Davies.  The afternoon saw two relatively quick wins from Colin Davies +24 and John Noble +20 to settle the match.  David Mathews was next to peg out his final ball winning +17.  This left Jeremy Scott still playing.  His opponent had made good use of her 7½ bisques to take a commanding lead but had broken down in the final play leaving Jeremy one last chance to try and steal an unlikely victory.  But it was a mammoth task for Jeremy and though he narrowed the gap the result was a consolation win for Nottingham +8.  Overall another excellent win from an unchanged Letchworth team. 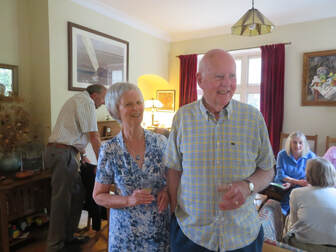 Summer Lunch party
Another happy, successful and well-supported event. Thanks to Jan and Ray for their excellent organisation and hard work and to Andy for, once more, opening his house to everyone.
We missed the sunshine but enjoyed the splendid range of food provided and a stroll round Andy's garden.
More photos of Lunch party 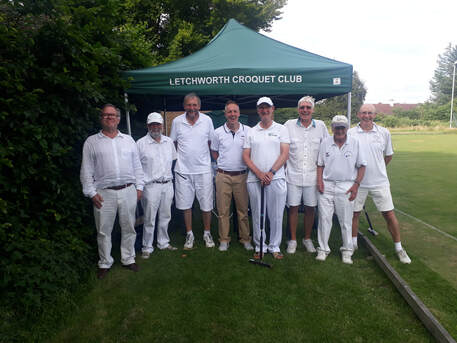 Longman Cup win in second round.
Letchworth win 5 - 2 against High Wycombe.
Congratulations to our team, Colin Davies, David Matthews, John Noble and Jeremy Scott
Report on Longman match
National Forest GC Open Championship
For the second time in June Letchworth’s John Noble reached the final of a major national tournament, most recently, the National Forest Open, at Ashby 29-30 June.
Noble secured his place in the final by beating the top seed and local favourite Tim King.  This was the second time that Noble has beaten King in a semi-final: Noble also had the better of him when they met at Wrest Park’s A-Class tournament just three weeks earlier.  As befitting a Championship tournament, the final of the National Forest Open was a tense and thrilling spectacle, much appreciated by the large crowd of players and enthusiastic spectators.  The eventual winner, Callum Johnson, a 20 year old apprentice from York, who has only been playing a few years, always looked the stronger player: powerful, smooth and deadly accurate.  Johnson took a crucial early lead in the deciding game.  But Noble didn’t make it easy for him, fighting back to tie the game 6-6 with an impressive display of long shooting and was only denied the opportunity of taking the match to a third deciding game by some superb play from Johnson at the 13th hoop.  The two finalists both secure automatic qualification to this year’s English National Singles Championship in which the Country’s top 16 players compete for the prestigious Ascot Cup. 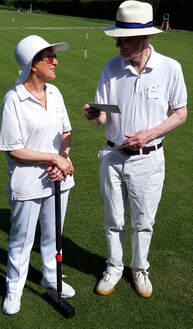 A winning day for Tracy Martin
Saturday 29th June
Tracy won the  B=level GC tournament at Newport
On the hottest day of the year so far, Letchworth player Tracy Martin kept a cool head to win her first B Level play tournament at Newport, Essex. There was a field of 10 players from various East Anglian clubs, divided into two groups of five. With convincing wins against all four players in her group, Tracy went on to play Group Two winner, Newport youngster Henry Adison-Atkinson (only 20!), in the Final. After a nervous start and 1-3 down, Henry settled down and came back with some great clearance shots bringing the score to 3-5. Both players went on to take another 2 hoops each with Tracy just clinching it to take the match 7-5. She congratulated young Henry on some great play in only his second year.

Longman Cup
The second round of the AC Longman Cup will be played at home on July 11th against High Wycombe. Playing for Letchworth are Colin Davies, David Mathew, John Noble and Jeremy Scott 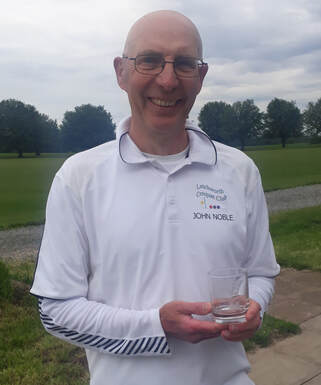 Letchworth’s John Noble (picture) reached his first A-Class final at Wrest Park on 8/9 June.  In the Semi-Finals, John Noble played extremely well to beat the current Trophy Holder, Ashby’s Tim King (7-5,7-5), while Phyllis Court club-mates Chris Roberts and Roger Goldring fought out a long and very close match which Roberts eventually won (5-7, 7-5, 7-5).  The Final, watched by a small but appreciative audience, was a classic between two players on top form: both matching each other with long clearances and impressive hoop running.  In the deciding game, Roberts took a 4-1 lead but Noble fought back to level at 5-5, then ran the 11th hoop to take the lead.  Noble had a chance to seal victory at the 12th, but Roberts took him to the 13th and final hoop, which he ran successfully at 7.15pm to clinch a fine win (7-4, 5-7, 7-6).

David Clancey wins GC Handicap Tournament (for 2018!)
Congratulations to David for winning the last Final from 2018. The match was postponed until the lawns were restored to full size after the winter refurbishment. David beat Brian Havill 2 - 1 just completing the match before the rain and hail arrived.

Presentation to winners of 2018 tournaments at the AGM

Croquet Association  Tournaments at Letchworth - Is this the year to take the plunge?
If you are thinking of playing in one of the Croquet Association tournaments held at our club then now is the time to enter.
Full details under the Heading CA Events at the top of this page or on the CA website.
Our Club Chairman John Noble is keen that we have more players from Letchworth taking part this year. Entries can be made through the CA website but John can help if you are unsure about how to go about it.
News from 2018