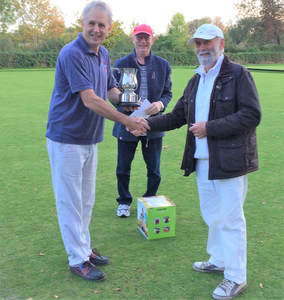 Longman Cup
Having beaten Watford, Colchester and Nottingham in the first three rounds of the Longman Cup this year, Letchworth played in the Finals Weekend at Surbiton on 6/7th of October and came third. Letchworth beat Ealing on the last day but had previously lost to Tyneside 3 - 4 , the eventual winners. All the matches were extremely close.
Congratulations to our team of David Mathews, Andy Allen, David Clancey, Colin Davies and John Hall for their successes this summer.
The winners were Tyneside who beat Hurlingham.
David is embarrassed that he is the only one of the team in the photo when he felt all team members should be there.. As he explained ' I never gave photographs a thought - it was all a bit rushed at the end of the day, everyone else had gone and the officials were waiting to get rid of the cup and go home ! Well done that team.'
Finals Day 15th September
Congratulations to all the winners!
Nick beat Heather in the AC Level Play
Stuart beat Paul in the GC High Handicap
Lynn beat Andrea in GC Ladies
John A. beat John B. in GC 7-point
Graham W. and Lynn beat Robert and Graham S. in GC Doubles
Some matches were played earlier:-
Nick beat Brian in AC Single Ball
Brian beat David M. in AC Handicap
Nick beat Brian in GC Level play
Stuart won the AC High Handicap
One match outstanding -  Brian v David C. in GC Handicap
Thanks to Keith for organising the day and to Tracy and Brian for arranging and monitoring the summer-long tournaments
News of the latest exploits of our Longman Cup team . . .
by Keith Rhodes

The Longman Cup is a National AC Inter-Club competition, and our team is doing rather well this year.

They beat Watford (away) in the first round; Colchester at home in the second round; and have now followed up by winning away at Nottingham.    The match went all the way to a nail-biting conclusion, with Andy Allen winning at the Golden Hoop in the final game.

The team for the last two games has been David Mathews, Colin Davies, David Clancey and Andy Allen - in the first round Colin was joined by Martin King, John Hall and Jeremy Scott.   Congratulations to all of them for getting Letchworth through to the Finals Weekend, to be played at Surbiton on 6-7 October.    Semi-Finals on the Saturday, followed by the Final on Sunday.

The only time Letchworth has previously won this competition was in 1989, when Duncan Hector and David Tutt were in the line-up.    An open-top bus parade through Letchworth has been promised if the current team do the same!
John Noble wins Hunstanton’s GC Open A-Level Tournament for the third year running
Report by John Noble

Hunstanton’s GC Open A-Level Tournament, 21-22 July 2018, was contested by 10 players (a smaller and much less high-powered field than in previous years).  The format was adjusted to a straightforward all-play-all over a day and a half.  John Noble won the tournament for the third year in a row with 8 wins (net hoops +22) and once again retains the Hampson Memorial Salver.  Christine Wood, a name to watch out for, was runner up with 7 wins (net hoops +11) and was presented with the Plate; and with third place going to Andrew Carpenter (6 wins; net hoops +2) the home players were kept off the podium altogether.

Friday 13th - unlucky for some they say, but not for Stuart Haggett, who won the C- class GC Tournament at Leighton Linslade on 13th July.
Stuart reports as follows:-
It was yesterday, Friday 13th and blisteringly hot all day. The lawns as you will remember are "interesting" with hills, valleys and nids de poule, so the local members have an advantage.
I, despite losing the first game 3-7, surprisingly went on to win the tournament and take home the glass trophy. Hopefully we did Letchworth CC proud and continue the tradition of Letchworth winning this tournament. 😀😀(Tracy won last year)
It was a lovely day and thoroughly recommended.
Robert Staddon & Graham Styles win the first of this year’s Club GC Doubles Competitions.
Congratulations to the winners, Robert & Graham, who were the only pair to win three of their four games, losing only their first game - to Tracy & Trish.  As we entered the final round of games two other pairs were also in contention for the top slot, but 60 minutes plus eight strokes could not separate Peter Brock & Ray Scroggins and David Clancey & Susan Griffiths who both finished on five points (2 wins, 1 tie).  David & Susan took the silver medal with a marginally better hoop difference.  Tracy & Trish and John & Margo were less successful on the day with only one win each.

It was a thoroughly enjoyable day played on one of the hottest days of the year so far.  We were all glad of the early start and a reduced format that meant we played only four games.  And, importantly, we got back in time to watch the end of the football.
The next GC Doubles competition is set for Saturday 11 August.  Application forms will go out nearer the time.
Strawberry Tea GC Fun DoublesTournament
A brilliant afternoon, organised faultlessly by Colin, culminated in a win by Tricia and Ray while Stuart won with the highest individual score.
Strawberries and cake rewarded the rest of us.
Edward Martin Tournament
May 28th
Edward Martin Cup

This annual tournament in memory of a former member was played on Bank Holiday Monday in ideal weather conditions, starting in mist on a slow wet lawn and ending in warm sunshine on a lawn greened up by recent rain.

Twelve members took part, playing in three groups of four, with group winners and best runner-up proceeding to the semis and final.    Inevitably there were some close finishes in the early stages, with many cries of "if only I'd had another minute", but the four getting to the final stage were Peter Aspinall, Robert Staddon, Colin Gregory and Peter Brock.    By the time of the final, all other games had finished so everyone sat down (with cake, of course) to watch Peter Aspinall and Colin Gregory fight to a finish at the golden hoop, with Peter just prevailing to win his first Edward Martin.  Congratulations to him and to all the other players for making it a grand day out.

And my thanks to those who who happily stayed on to help clear the lawn and all the other paraphernalia - a team effort indeed.
Keith
Special thanks to Keith, too, for all his skilful preparation and organisation which made the day such a success.
GC Fun Doubles May 6th
Congratulations to John Noble and Sheila Amos, the winning partnership and to Sheila Rhodes for the highest individual score. Thanks to Colin Gregory for the impeccable organisation and weather and to Graham Wood, another prize winner! 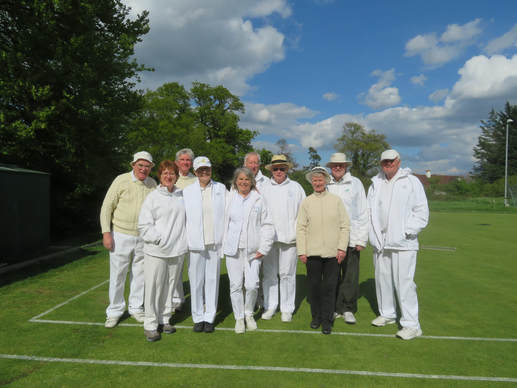 A sunny day; hard fought games; friendly rivalry; a perfect start to a summer of competitions!

This is still the only 14-point Advanced event in the CA fixtures calendar. It’s a great one-day format, offering plenty of interactivity and a range of different challenges not usually encountered in normal 26-point play. Other clubs should really consider following suit. 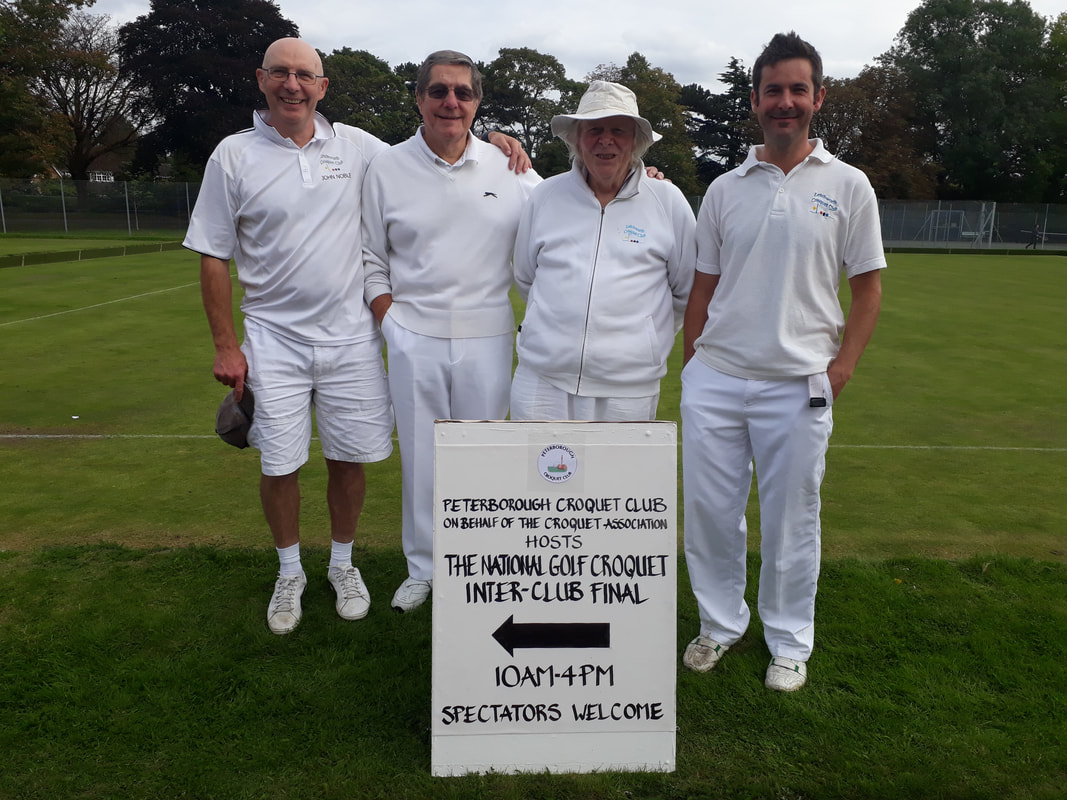 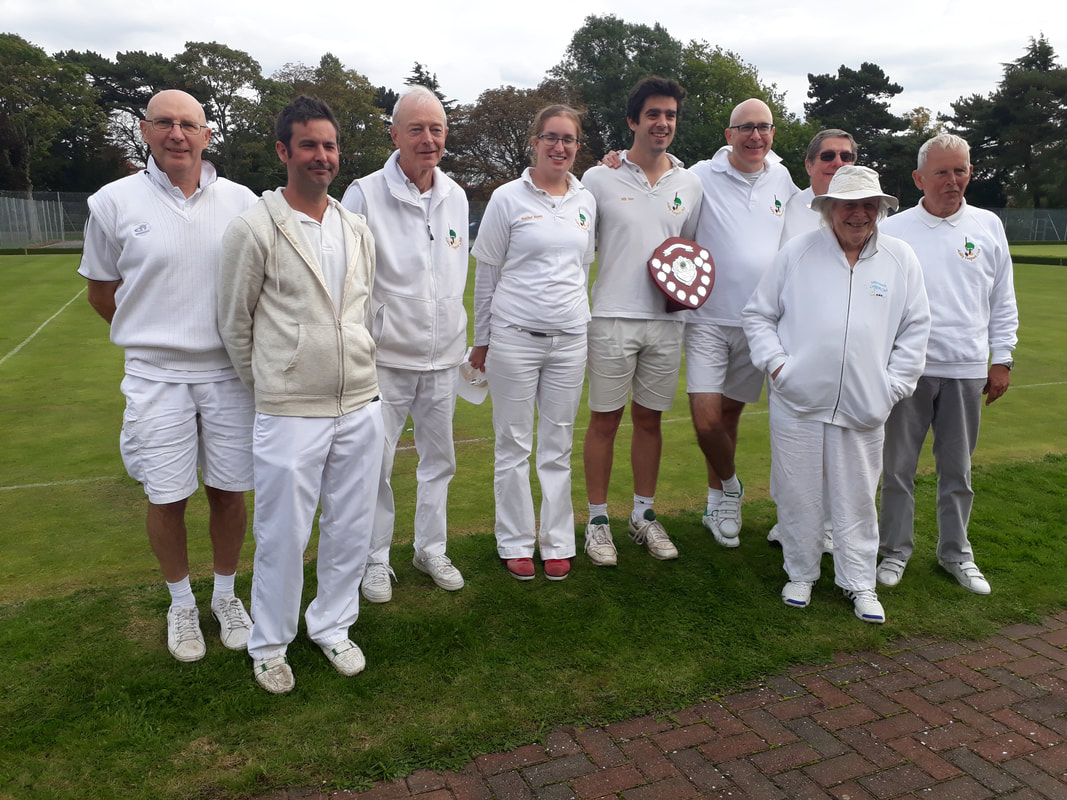 Asbhy won the GC Inter-Club final beating Letchworth 4-3 on Saturday 23rd September.  The match took place at a neutral venue - PETERBOROUGH Croquet Club – which is located equally convenient for both sets of finalists.

The match was close from beginning to end and at no point did the Ashby players, nor the numerous spectators, feel confident of the outcome.  Indeed, each game was hard fought and much closer than one might have imagined from an examination of the teams on paper (net handicaps of -11 vs -4).

The morning session went to form giving Ashby a 2-1 lead at the lunch break.  The afternoon, however, proved much tighter, with Letchworth winning two of the first three singles matches to finish, and so levelling the overall match at 3-3.  This left Will Gee and Nick Mounfield still playing, level on one game all: one, final, 13-point game to settle the result.

This is the furthest Letchworth have ever got in this tournament.  And, with notable away wins at Surbiton and Dulwich along the way it has been an excellent year for Letchworth and the closest we could have got to winning without actually lifting the Trophy.

Peterborough are a small but growing club with one dedicated lawn and two others (the better ones!) shared with a Bowls Club, all in pretty good condition and overlooked by a large, solid, club house.  They provided great hospitality, a lovely lunch, and a good number of enthusiastic spectators keen to see how GC should be played... at least that’s what we were told, and who, I think, were secretly on our side: they seemed to me to cheer the Letchworth players louder.