National winners of the Longman Cup! 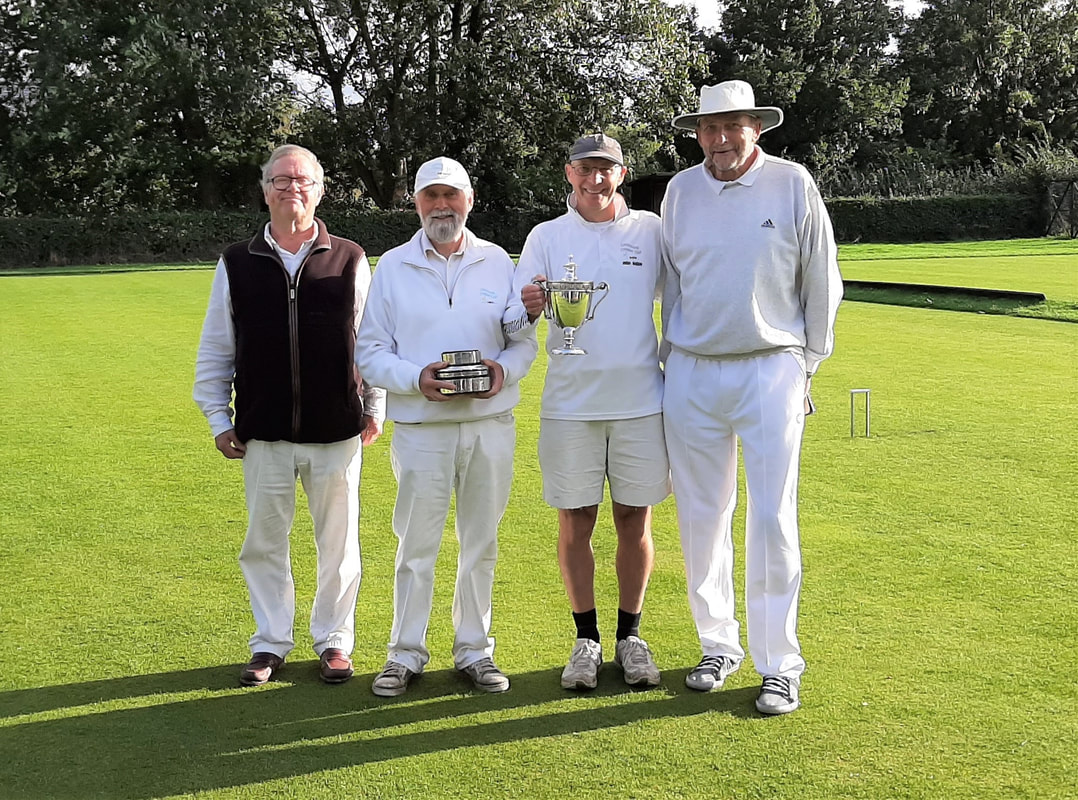 Victory for Letchworth in the Longman Cup

Letchworth, St Albans, Chester and Sussex made it through the early knock-out rounds to reach the finals of the Longman Cup, this year hosted by Surbiton, 5-6 October.  Letchworth fielded the same four who had played together in all earlier rounds: Colin Davies, David Mathews, John Noble and Jeremy Scott.  Letchworth secured their place in the Final by beating Chester 4-3 in the Semi-Final on a dull, but dry Saturday.  Unfortunately, Sussex proved too strong for St Albans who were ultimately unsuccessful in making the Final an all-Hertfordshire contest.  Saturday night saw constant rain and the Letchworth team arrived at Surbiton on Sunday morning to find much of the playing surface underwater.  The forecast had improved overnight and suggested little more rain, but play was able to start only after several hours hard work by the Surbiton grounds team and then on only three rather than six courts.  A truncated format of the game (known as 14-point croquet) had to be played in order to accommodate all the matches within the day.  After the delayed start Letchworth soon eased ahead 1-0, by lunch had a 2-1 lead, and only an hour later two quick wins had secured the match 4-1.  The remaining two singles were played in a mixture of bright sunshine and squally showers and the games shared to make the final score 5-2.  The trophy was presented to John Noble by Quiller Barret, President of the Croquet Association.  The Longman Cup has a long history and the impressive piece of silverware was first competed for in 1929, Edgbaston being the winners that year.  Letchworth last won the trophy in 1989. 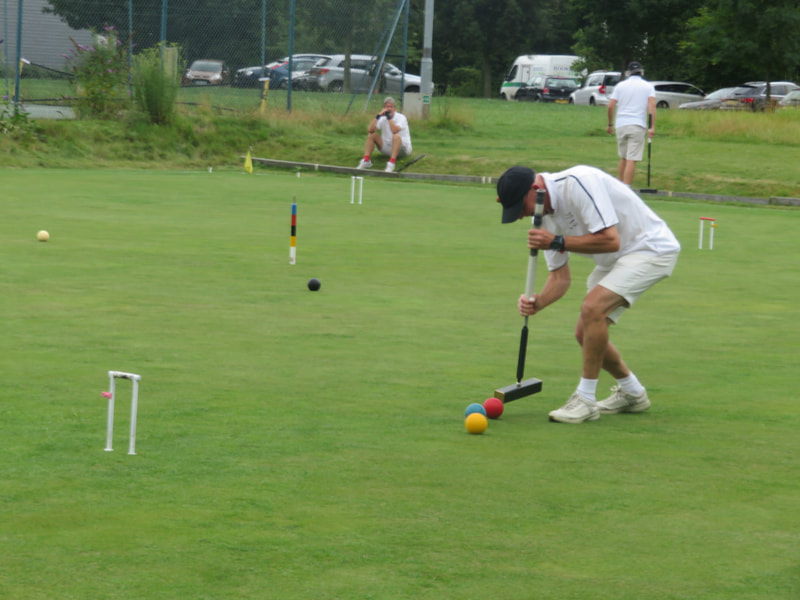 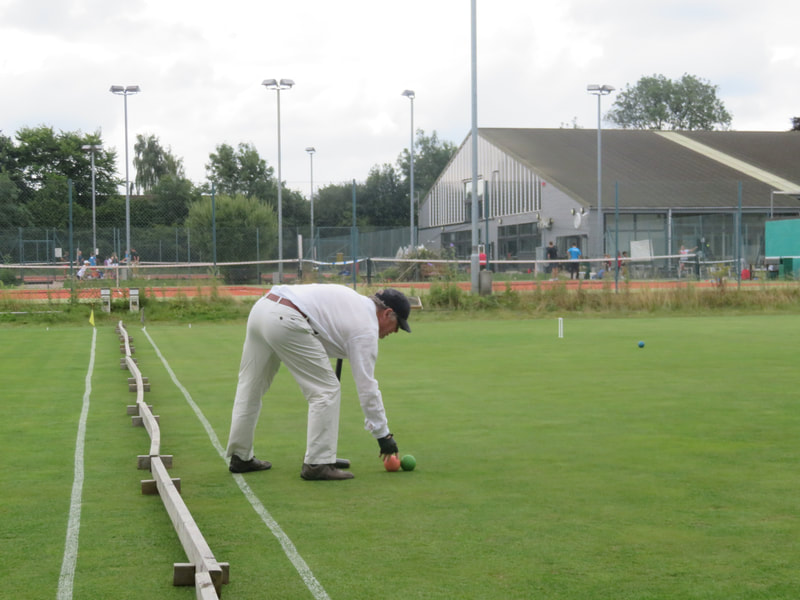 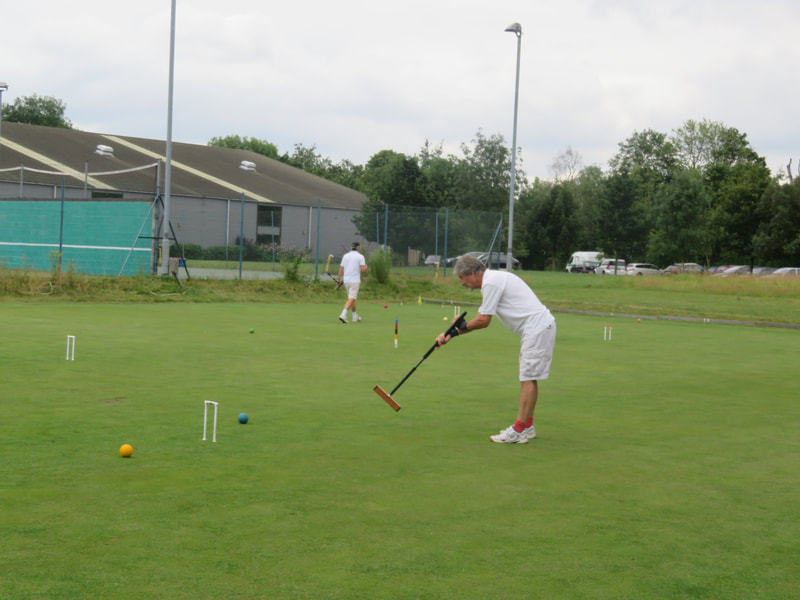 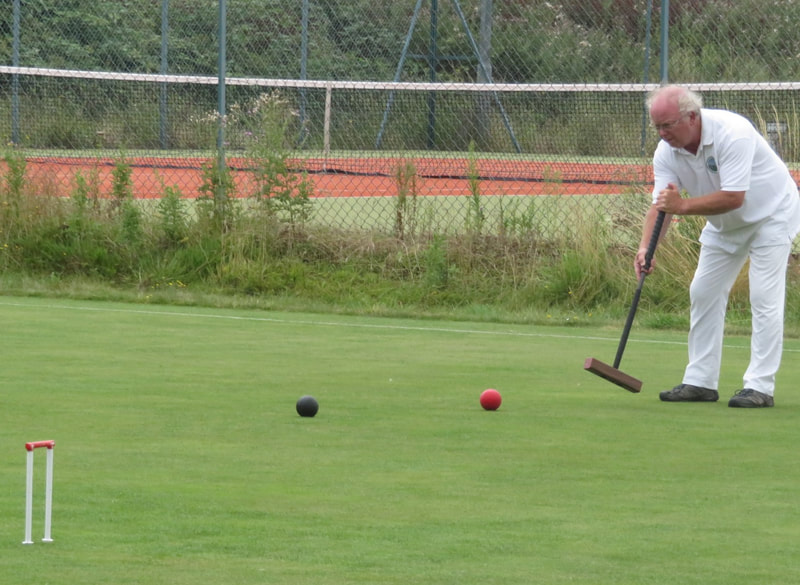 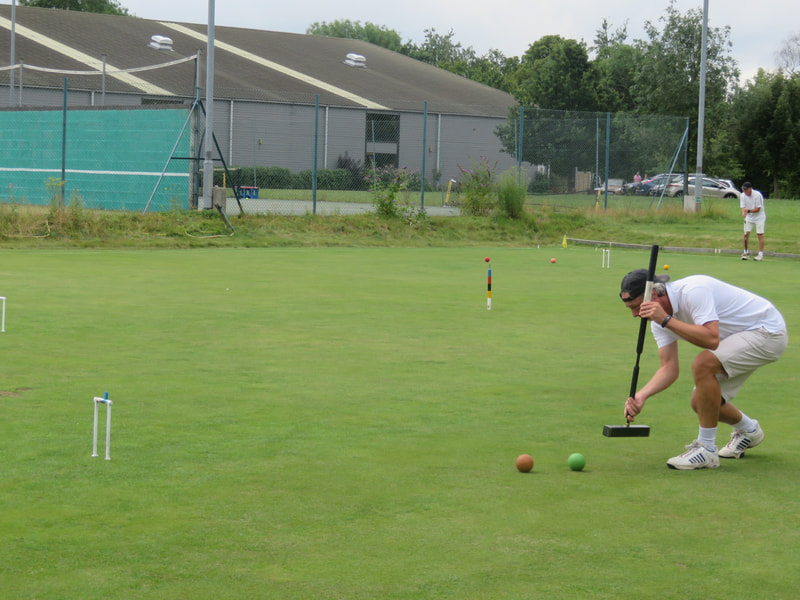 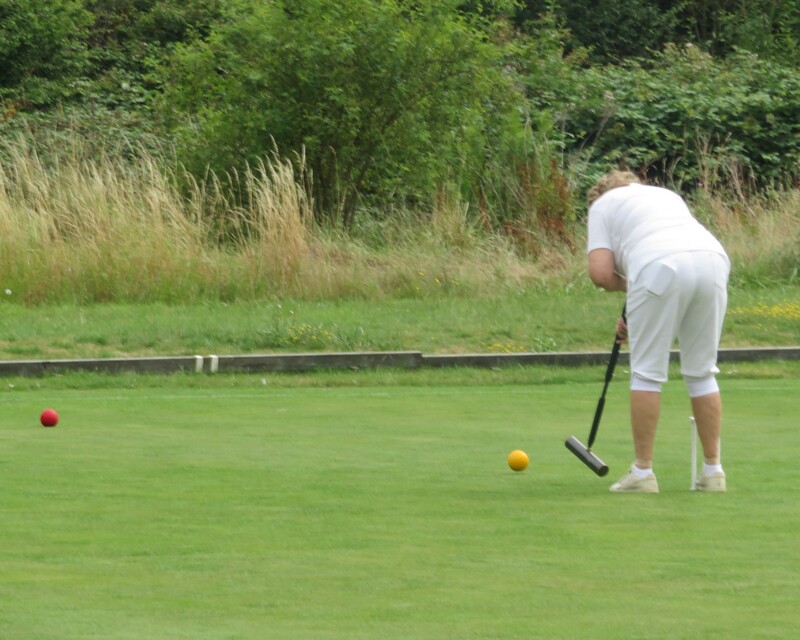 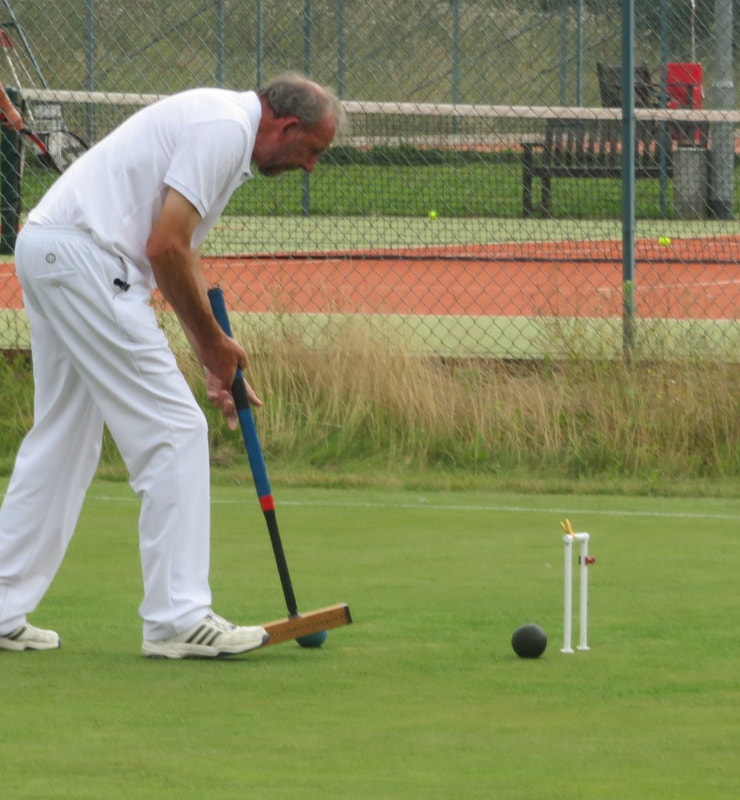 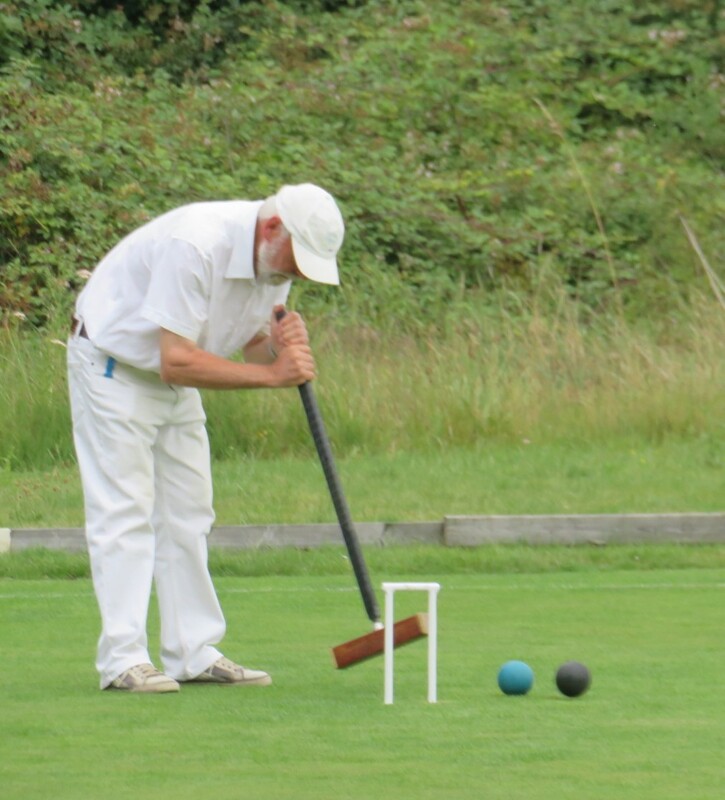 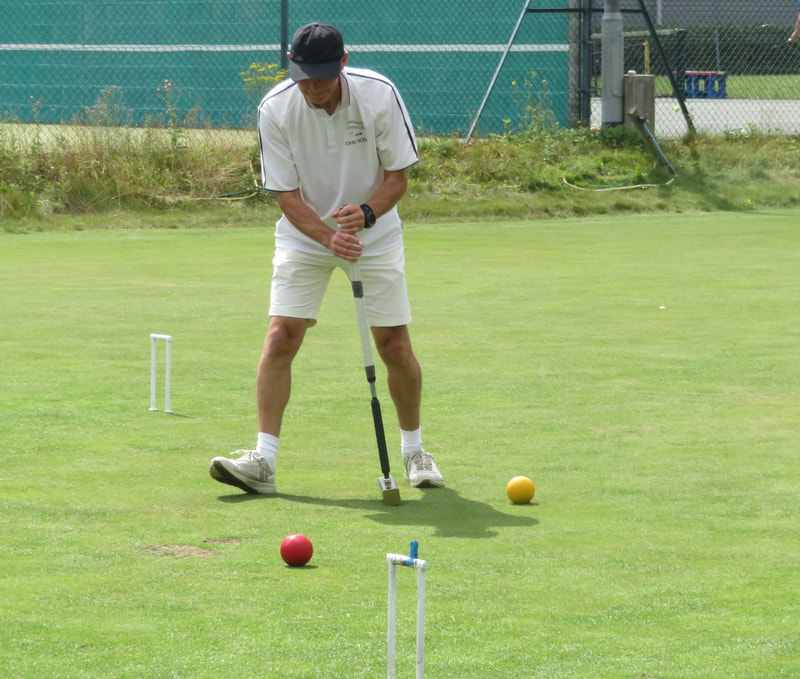 August 1st
Letchworth beat Nottingham 5-2 in the last of the national knock out rounds to proceed to the finals of the Longman Cup in which the final four teams will fight it out at Surbiton, 5-6 October.  The morning session ended 2-1 as Jeremy Scott and John Noble chalked up good wins +12 and +21, with the Nottingham pair taking the doubles +6 after a long struggle with David Mattews and Colin Davies.  The afternoon saw two relatively quick wins from Colin Davies +24 and John Noble +20 to settle the match.  David Mattews was next to peg out his final ball winning +17.  This left Jeremy Scott still playing.  His opponent had made good use of her 7½ bisques to take a commanding lead but had broken down in the final play leaving Jeremy one last chance to try and steal an unlikely victory.  But it was a mammoth task for Jeremy and though he narrowed the gap the result was a consolation win for Nottingham +8.  Overall another excellent win from an unchanged Letchworth team. 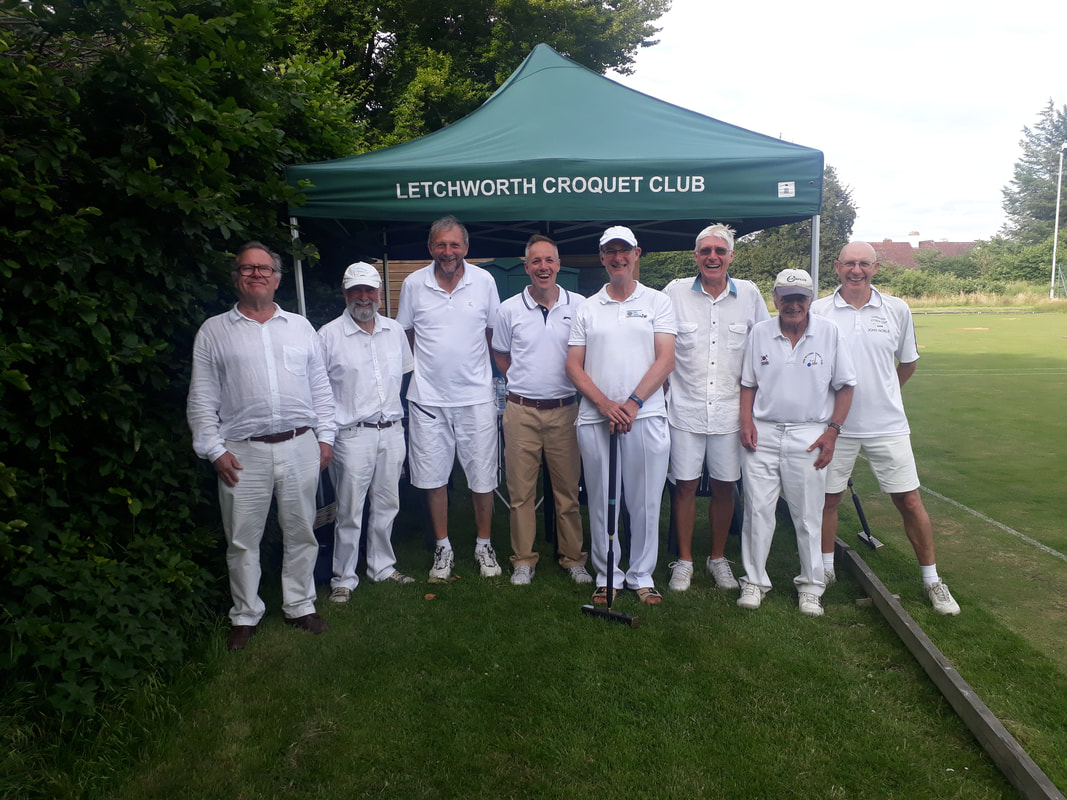 11 July 2019.  Letchworth progress to the third round with a home win against High Wycombe.

Letchworth (Jeremy Scott, David Mathews, Colin Davies, John Noble) got off to a good start taking a 2-1 lead in the morning session.  The first two games to finish in the hot muggy afternoon also went Letchworth’s way, giving the home side a winning margin well before England’s cricketers had beaten Australia.  Only High Wycombe’s Ed Olhausen prevented a whitewash by securing a win in both his games.
Final score Letchworth 5, High Wycombe 2.
Rumour is we meet either Nottingham or Wrest Park next...

PS.  Olhausen is new to the game of croquet and still in his first season, but it is clear to Scott and Noble that he won’t stay on 16 for long.  Bandit.  By which I mean he is a good player, likely to become very good.

Letchworth beat Newport 6-1 in the opening salvo of this year's Longman Cup.  It was a good win.   The next round will see us playing High Wycombe, against whom we have no history.

GC Interclub
by Dr Tim King at Moira, Leicestershire
7th June
Ashby won 6 - 1
After losing their only match on court in 2018 (a semi-final against Nottingham), four-time champions Ashby were back to their traditional best in beating Letchworth in this wet first round match of the 2019 GC Inter-Club. The two clubs had most recently met in the 2017 final, a close match in which Ashby had completed their fourth straight win against Letchworth.
The Letchworth team must have had a spring in their steps, however, when they realised that Will and Rachel Gee would not be in the Ashby team for this latest encounter. Those two players have a combined record of 11 wins and 2 losses against Letchworth (while non-Gees are 6-8).
Facing the prospect of missing this fire power, non-playing captain Ray Mounfield made an inspired selection by picking Paul Durkin, who went on to beat the higher ranked John Noble in the morning rubbers.
This victory (completed even though the captains offered holding back the deciding third game because the other two rubbers were already completed) was arguably pivotal to the Ashby victory as it gave them a 3-0 lead at lunch time and sent their players into the afternoon session full of confidence.
The other potentially crucial moment in the day was a hoop 6 in the first game of the doubles. Tim King peeled an unlikely opponent ball and this proved to be irretrievable in terms of the result of the game. His reaction, however, was crucial. He showed no flicker of emotion and went on to play solidly for the rest of the rubber.
The other key feature of this rubber were the jump shots.
Ashby started weakly with a couple of misses and then Nick Mounfield played a glorious, long bouncing bomb to win the first game at the eleventh. Ashby responded strongly for the rest of the rubber and, when King nailed a long one to give a 3-0 lead in the deciding game (with Mounfield, next to play, without a clear approach to hoop 4), the home team was on course for a reassuring second point to add to the one won by David Bell against John Skingsley.
After lunch, Ashby went on to offer almost no glimpse of a potential come back to the visitors as the afternoon action proceeded. Mounfield was the only Letchworth player who showed much promise in the first games, although even he went on to lose this game along with all his other teammates.
This left the main uncertainty as being who would score the winning point and, not for the first time in his career for Ashby, this proved to be Mike O'Brian, comfortably beating David Tutt, who was enjoying the steady rain no more than any of the other players.
Bell and Durkin shortly followed by also completing their rubbers in straight games.
Mounfield levelled his rubber and, after weighing up preventing versus enabling a whitewash, he proceeded to secure the consolation point for his team by playing a series of controlled clearances and precision blocks, demonstrating his AC pedigree.
The overall result though was a strong triumph for the Ashby team, with the even better news for them being that they now expect Will and Rachel to be back from Australia in time to play in the next round against Northampton. This is a tie that has never occurred before in the GC Inter-Club although it will resonate with old timers who still remember when Northampton was part of the East Midlands Federation.