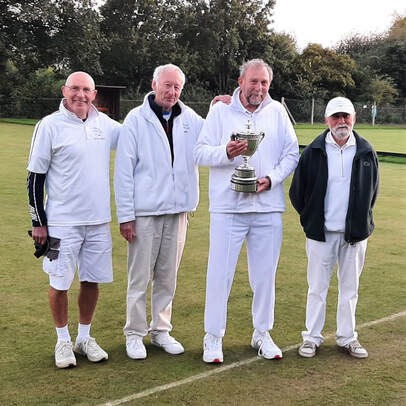 Longman Cup
Semi and Finals October 2nd and 3rd at Surbiton
Report by Colin Davies
Letchworth played Bowdon (from Manchester) in the semi final of the Longman Cup at Surbiton on a cold and windy Saturday. The weather got worse as the games progressed with rain falling steadily.
After the morning three matches, one doubles and two singles, we found ourselves losing 3 - 0. After lunch the four singles matches started. David Mathews rapidly won his game +21.  Soon after, with standing water on the lawns, play was abandoned after 2hrs play so we left losing 1 - 3. At that time John Noble was a couple of hoops in front, David Clancey drawing 11 all and Colin Davies only scoring 3 hoops, so behind by 9. The following day we arrived at Surbiton at 08.35 for a 09.00 start. All three games went to time; David C. pegged as time was called, John won 23 - 21 and Colin won 23 - 12 so, from the brink of defeat, we managed to win 4 - 3 and into the final.

Some 30 minutes later we started the final against Hurlingham (who beat Harlen and Eynsham in the other semi). We started better in this match -  David M 22 - 17T and John 16 - 11T both winning their singles matches on time with Colin and David C losing theirs 18 - 20T also on time. So at lunch we were 2 - 1 up.
With the afternoon four singles about to start there was more heavy rain which only lasted 5 minutes so, with blueish skies, play started.
David C was first to finish, unfortunately losing 12 - 26; match score 2 all.  David M finished next winning 26 - 23; match score 3 - 2.
John's game was next to finish losing 22 - 26; match score 3 all.
In Colin's game, with time running down, he was one hoop down when his opponent missed allowing Colin to get from 1back to peg. His opponent hit in and made one hoop then broke down. As Colin was then in play - time was called - he split his opponent's balls and his own allowing his opponent a shot which missed giving Colin the win and Letchworth the match 4 - 3
We've now, in the last four years won this competition twice and come third once - not entering last year.
We have used seven players this year
Colin Davies (5), David Mathewd(4), David Clancey(4), John Noble(3), Stuart Haggett(1), George Woolhouse(1), John Hall(1)
David  Mathews has now dropped his handicap to 3 and is no longer able to play in this competition
Longman Cup
Letchworth, by winning at High Wycombe, have reached the finals of the Longman Cup for the third time in the last foue years (we didn't enter in 2020).
The team of David Mathews, David Clancey, Stuart Haggett and Colin Davies travelled to High Wycombe for our Quarter - Final match.  Before play started all our Handicap cards were checked by a CA Handicapper who found  David Clancey's handicap was incorrect and altered it from 12 to 14.
Play started on very fast lawns with David C. and Stuart playing the morning doubles game. With the game tied at 14 all and time called, the extra turns failed to find a winner so play continued until the golden hoop was scored by us, giving us the win.  David M. gave 6.5 bisques away and won 26 - 18, Colin lost 11 - 26. So after the morning games Letchworth were winning 2 - 1.
The afternoon games ended with wins for David M. 26 - 20,  Colin 26 - 7,  David C. 25 - 8t and Stuart 23 - 16t giving us a 6 - 1 win.
During the match there were rumblings about Stuart's handicap being too high.  By now there were two CA Handicappers, one playing and the other. acting as a referee, cut Stuart's handicap from 18 down to 10 after play had finished.

Mary Rose Competition
AC Level play
Match v Nottingham July 22nd at home
We lost 2 - 5 against last year's winning team
Our team members were Heather Bennett, Keith Rhodes, Jeremy Scott and George Woolhouse.
Nottingham handicap total was 5 and our team total 11.5
CA GC B-Level (3+) Series Tournament
17/18 July at Letchworth
Five Letchworth players signed up for the tournament which took place on one of the hottest weekends of the year. Three players came from other clubs including one who travelled down from the Lake District.
As a national competition it had to be run over two days: day 1 was the all-play-all block stage and day 2 the finals and semi finals to determine 1st to 8th place.
At the end of day 1 Trish (amazingly) was in the lead having won 5 of the 7 matches, followed by Lynn in 2nd place and David Clancey in 4th.
Day 2 Trish beat David to get a place in the final, but then the heat got to her and she lost the plot in that match. She finished 2nd to Simon Draper with Lynn and David 3rd and 4th respectively. The results largely depended on tolerance of such extreme heat; we were flagging toward the end.
An excellent result forLetchworth: Lynn gained her 5 handicap, and along with Trish, is now half way to a 4 handicap. A special mention for Graham Styles who stepped in at the last moment to take the place of a competitor from Newport - thank you Graham.
Longman Cup
Second round win against Watford 4 - 3
Our team of George Woodhouse, John Hall, David Mathews and Colin Davies braved the elements of a British summer's day, wind, rain, sun with waterproofs going on and off like a yo-yos, to play Watford in the second round of the Longman Cup.

After the three morning matches, one doubles game and two singles we were 2-1 down with Colin being the only winner for us, In the afternoon's four singles we won three out of four with wins for John, David and Colin giving Letchworth a 4-3 win.