AC League match v Northampton 10 August
Congratulations to Ian, George, David M. and Stuart on our first win of the season 4 - 2 against Northampton.  We now look forward to 2022 with confidence! 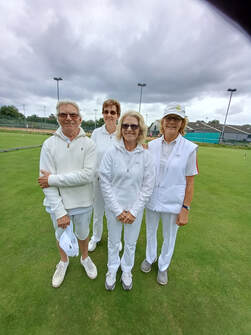 Falcons V Leighton Linslade 27 August
GC B-level play
Report by Patricia Noble
I am delighted to report that Falcons won despite stiff competition from the Leighton Linslade team. The final score was 10 - 8. Our victory was largely due to Lynn Wood who won all her matches in fine style. Sadly a rather indifferent performance from the captain - but onwards and upwards next time.  More practice needed!

Letchworth Hawks GC Handicap match v Meldreth
August 20th
The Hawks played their last league game this year at Meldreth. For once weather wise the conditions were good and we were made very welcome by our opponents.
Our team was Sheila and Stuart Haggett and David Clancey.
As Meldreth only has one lawn the first round consisted of one doubles match which was won by Meldreth but the singles was won by Sheila so all square. Each succeeding round followed the same pattern with the number of matches shared so at the end of the day honours were even and the match declared a draw 5 - 5.
Our star player was Sheila who won all three of her matches and in the process lowered her handicap from 9 to 8 - well played Sheila.
The Hawks have had a successful season winning three of their matches, drawing one and losing one. We await other teams to complete their matches to see where we finish on the leader board but it may be determined by hoop differences! 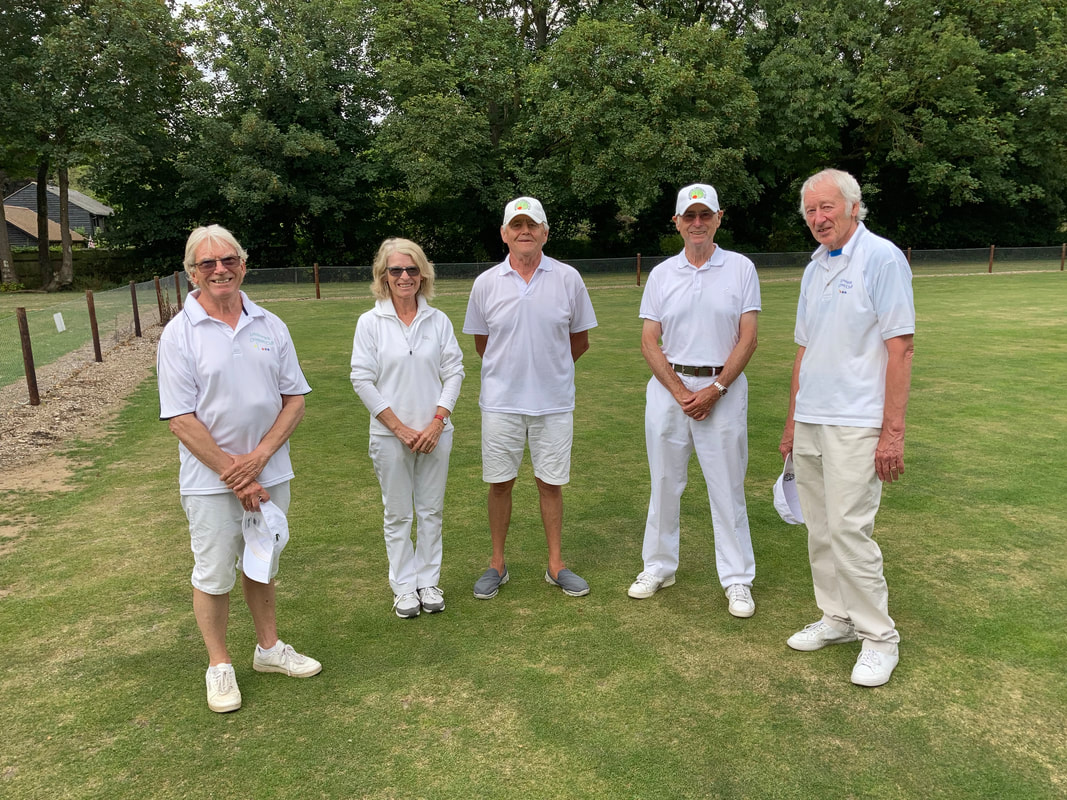 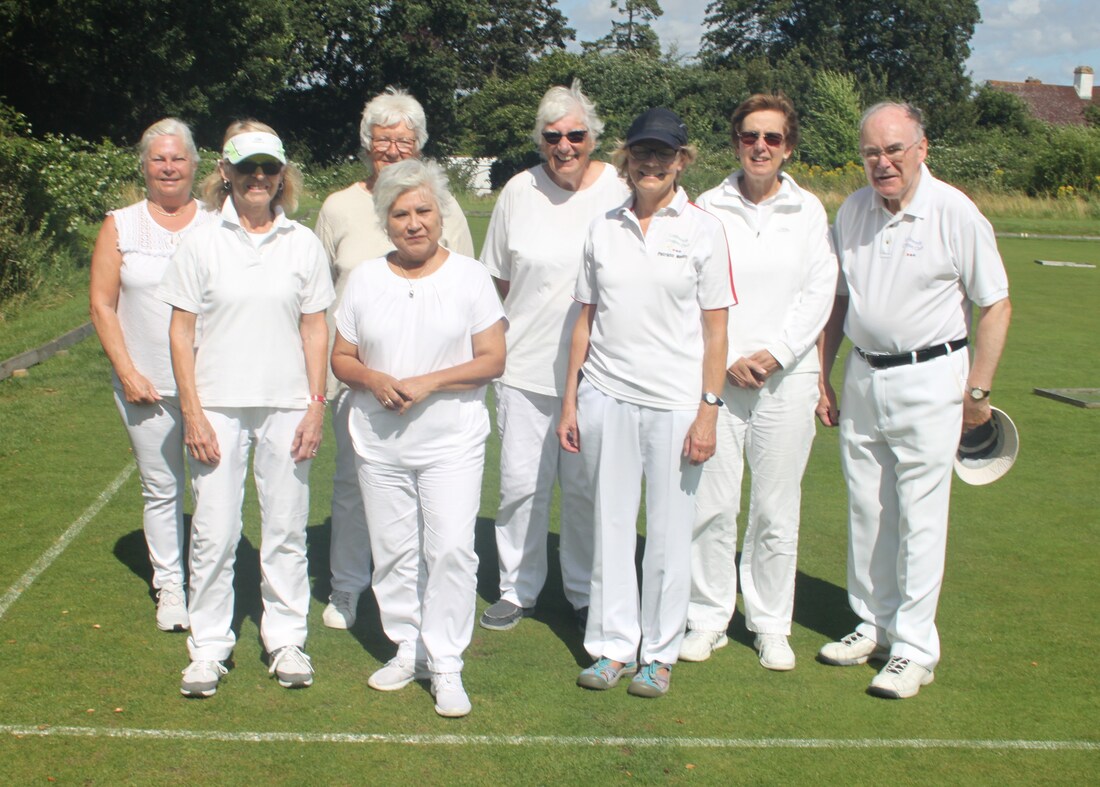 GC Handicap League match Hawks v Peterborough 6th August
Won 14 - 4
The Hawks were in good form playing Peterborough for the first time in this League. They won both Doubles matches and then shared the first two rounds of Singles with our visitors. These games were a learning curve as so many bisques were claimed by our opponents - 1, 3, 7 & 7!!
The star player for the Hawks was Lynn Wood who not only won all her matches but in the process reduced her handicap from five to four - well done Lynn.

GC Handicap match Hawks v Newport Oaks 30 July
The match was played on a very wet and windy day and it was a great credit to both teams that they braved the elements to play the match.
Newport won both doubles and then proceeded to win the first two rounds of the singles by three games to one. The final round was a draw with each side winning two games. This result did not reflect that most games went to the golden hoop so the Hawks should not be too despondent about the final result - 10 games to 4 in favour of Newport Oaks
The star player for the Hawks was Stuart Haggett who won all three of his singles.
EACF GC Open League
27 July 2021, Letchworth beat Wrest Park.
This was our second home match as well as the final match of the season.
Letchworth finished in fine form: winning by 11 games to 7 - an excellent result against an evenly matched team. We got off to a very strong start winning all four games in the first round of singles leaving Wrest Park 5 - 1 down. There was little comfort for them in the later rounds despite the odd wobble here and there. Overall, a solid and consistent performance from all four Letchworth players gave Wrest Park no comfort or hope of a late come back.
We now have a long wait to see where we end up in the league table, and the +13hoops (112 - 99) from this match could well prove vital in determining our final position.
A huge thank you and well done to all those who took part particularly Brian Havill and John Skingsley who played in all 4 matches and to Jeremy Scott (2), Heather Bennett (1) and Colin Davies (1)
EACF GC Open League Enfield v Letchworth 19 July
Nuts! Croquet is not coming home, but a proud moment nonetheless as Letchworth gets its first win of 2021, beating Enfield on their home turf 12 - 6. This most excellent result against an under-strength Enfield side almost certainly means that the wooden spoon has slipped from our grasp. The Letchworth players are fired up with the prospect of achieving mid-table status in their final game at home to Wrest Park next week. Come on the Black Squirrels!
GC B- level match Falcons v Watford 13th July 2021
Falcons faced Watford for their third League match. The team included Colin Davies, David Clancey, Patricia Noble and Andy Kennedy with a combined handicap of 19. The day started well with wins in both doubles and 3 singles wins and, even though Watford began to fight back, Falcons held on to their lead to win 11 to 7. After languishing, without a win, at the bottom of the B Level league it is lovely to be on the rise.
The lawns were much admired by Watford who declared they were lovely to play on. Thank you grounds team and well done Falcons!

GC Open League match v Watford 26th June
Watford beat Letchworth 11 - 7. There is nothing much worth saying - on the whole they played better than we did. Watford's courts were green and slow and took a bit of getting used to, but they are a great bunch of people and we all enjoyed ourselves, even Heather Bennett who was playing in the GC league for the first time
Letchworth Hawks GC Handicap match v Newport Elms
Tuesday 8th June was the most glorious sunny day – perfect for croquet. The team, Colin G, Stuart, Lynn and Trish, travelled to Newport for a handicap match against Newport Elms. Both sides were well matched, but Hawks won the day 11 games to 7. Everyone played really well – Stuart and Trish have now joined the ranks of the 5 handicaps, so congratulations to them.
We learned 3 important lessons, firstly to allow more travelling time if driving during the school run, secondly to have any potentially dodgy shots watched (yours or theirs), and thirdly to take an up to date copy of the rule book.

Well done, team.   We were beaten, but most of the games were won by small margins.   Nine of the eighteen games were decided at the golden hoop.  Considering the appalling conditions - one badly mown court with a very irregular surface, and continuous rain all day, we acquitted ourselves quite well. 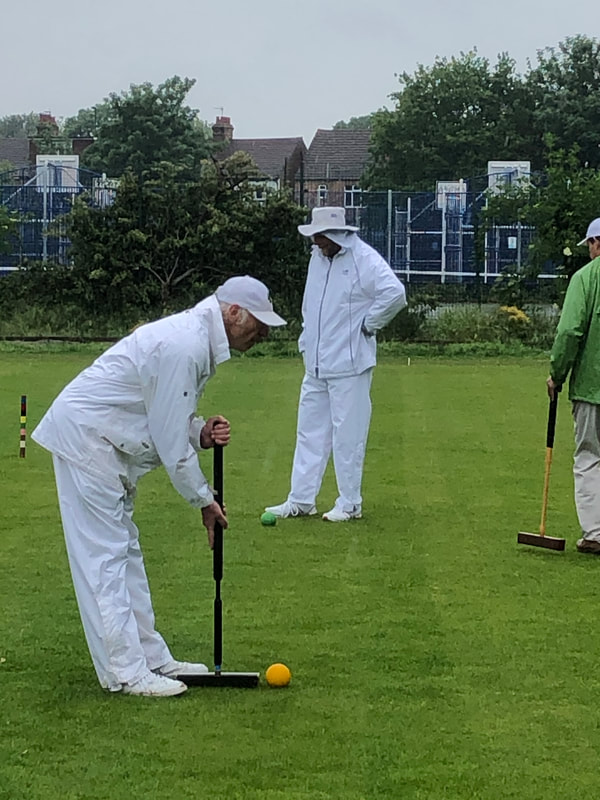 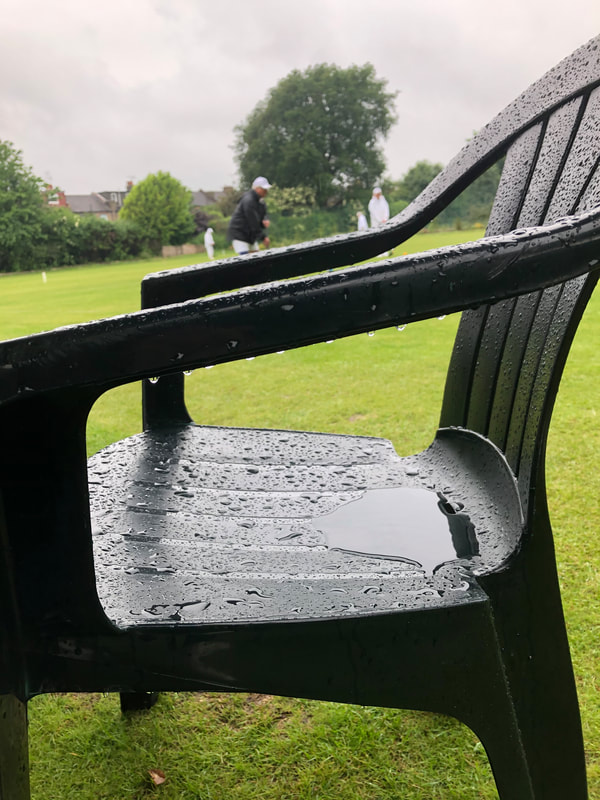 A slow start in which we lost both the opening doubles gave Northampton confidence to go 5-1 up after round two.  But we managed to pull things back and by midway through round four we (very) briefly had the match level at 6-6.  Going into round six, 8-10 down we still had a slim chance of tying the match by winning both remaining doubles.  But Northampton – the league favourites – had great strength in depth and though we managed to halve the round it wasn’t quite enough.  Result 9-11.  Good weather and good company, but a slightly disappointing outcome against a very strong side made it seem a long and tiring day.

Letchworth Hawks EACF GC Handicap match v Downham Market May 5th
Report by Ray Scroggins
Letchworth Hawks played their first away game of the season in the East Anglian Golf Croquet Handicap League against Downham Market on Wednesday 5th May in an idyllic setting in the grounds of Stow Hall, Stow Bardolph.
The team consisted of Sue Bathmaker and Sheila & Stuart Haggett who played against Ruth Cole,Nick Kime & Gill Dobson.
Each game was fiercely contested but resulted in an overall win for Letchworth Hawks by 9 games to 1.
We were made very welcome by Jonathan Toye and his team who told us a little about the history of the mansion house that once stood on the site and that the gardens are open to the public on two days a week.
We were delighted to see Duncan and Annette Hector who now live in the area and had come to offer us their support.
The afternoon concluded with the traditional after match refreshments. 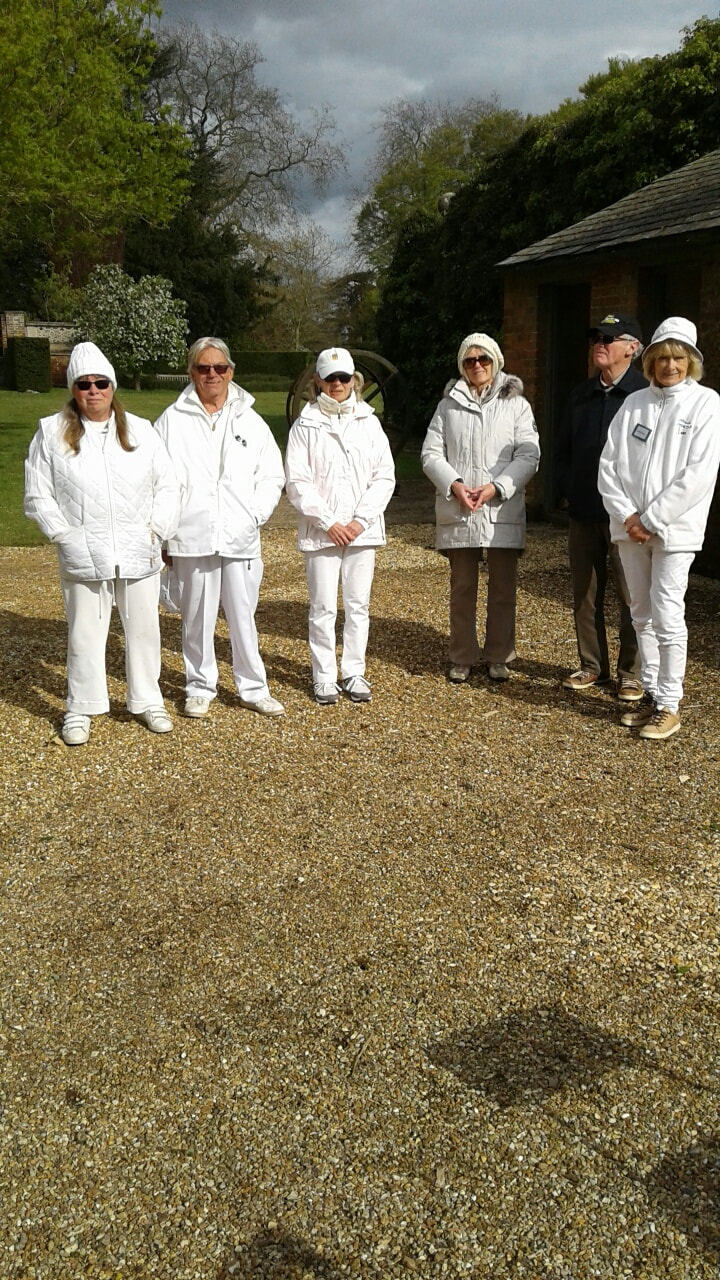