Reports of CA Events 2018
David Clancey wins the Letchworth June GC Handicap Tournament
Congratulations to David Clancey who won this year’s June GC Handicap Tournament.  David was last minute stand in for Henry Hobbs who was forced to withdraw, but which meant that half the field was made up of Letchworth club players.  The field also showed an unusually narrow handicap range of only 4 to 8, with no less than seven of the participants with handicap 6, which meant than many of the games were level play.
The way the blocks played out meant we had one all Enfield semi-final and one all Letchworth semi-final.  The top seed, Des Taylor (4), just had the edge over Andrew Fall (6) winning 7-6, and David Clancey (6) proved too strong for Tracy Martin (6) winning 7-4.  The 19-point final between Des and David was a tense affair: David took an early lead through good use of two of his three extra turns.   But Des played exceptionally well and by hoop 16 had closed the gap and at 8-8 looked to have the momentum to take the game.  However, at hoop 17 David superbly used his remaining extra turn to secure the hoop, take a vital 9-8 lead, and position himself well for hoop 18.  It was an instructional class in the best use of extra turns.  David won the game 10-8.
Congratulations also to Robert Staddon (6) who just pipped the highest handicapped player, Freda Knight (8), to take the “plate” 7-6 and win a bottle of beer for the non-finalist with the best net hoop score.
AC Handicap event at Letchworth May 9./10th
Heather Bennett presenting the winner's prize to Paul Hetherington (Peterborough) 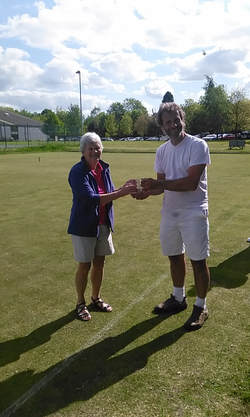 This is still the only 14-point Advanced event in the CA fixtures calendar. It’s a great one-day format, offering plenty of interactivity and a range of different challenges not usually encountered in normal 26-point play. Other clubs should really consider following suit.