Nick Mounfield wins Letchworth 14-point Advanced
Letchworth’s early-season event is the only 14-point tournament in the CA fixture calendar and, serving up a full 28 games, proved again that it’s a great format for a one-day event. Definitely something other clubs should consider doing.
With four wins from his five games, Nick Mounfield was the eventual winner. Last year’s winner, Bryan Harral, finished second on four wins from six games.
After managing three peels on two prior occasions (without successfully pegging out), Nick finally completed the day’s only triple peel (straight) in his final game. Anyone who thinks the 14-point format doesn’t lend itself to peeling turns should think again. 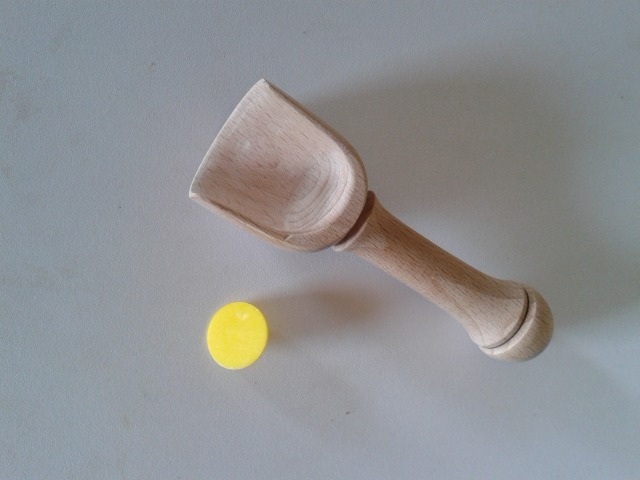 Eight players signed up for this year’s popular midweek tournament.   The first day was played in cold and breezy conditions, but luckily day two was largely bright and warm and the lawn got faster as the tournament progressed.

Notable events included CA Merit Awards being earned by Andre Machell (Bronze) and John Street (Silver).   Both Letchworth players, Heather Bennett and Peter Aspinall, were in contention right up to the last round, where Heather was pipped to the post by a worthy newcomer to this event, Andre Machell from Watford.

Andre won all five of his games, winning a Letchworth tankard and reducing his handicap from 11 to 10.

The award of the wooden spoon could well become an even more prized trophy; it was carved by David Mathews overnight and presented to John Andrews (Colchester) who seemed delighted to have won it !

Peter Dowd (Northampton) beat David Frost (Enfield) in a nail-biting finish to win this year's June GC level play tournament.  After conceding an early lead, David kept in touch eventually forcing the game to the deciding 19th hoop.  The game could have gone either way as both players made unforced errors, but in the end it was Peter's consistent shooting that proved the decisive factor.  For the spectators sitting in the unexpected sunshine it was a gripping game throughout.  Congratulations to Peter.

Played on the excellent prepared Letchworth lawns under fine sunny weather Arthur Reed had set the pace with three wins out of three on the first day. However, he was closely pursued by Keith Rhodes, Ian Parkinson and Mike Hills all on two wins apiece. On the second day the position became even tighter with one round to go the same four players each stood at three wins and it looked as if the final position was going to give the manager a nightmare sorting out.
However, after the final games only Mike Hills and Arthur Reed had four wins and as Arthur had earlier beaten Mike was declared the winner.
Jack Wicks won the Letchworth August tournament
by Andrew Gregory at Letchworth
13th August

Jack Wicks won the Letchworth August tournament. The rest of us played a Flexible Swiss, but Jack treated it as an American block, beating each opponent. Only the most recalcitrant Manager would have denied Wicks the trophy. (I did try.)
I guess Duncan Hector can claim the runner-up spot, pipping Simon Hathrell on the basis of buying me some beer. (Sorry, that should read who-beat-whom.)
The Best Game prize goes to David Marsh v Bryan Harral. David was halfway through a TP when he missed a return roquet after 1-back. Bryan thoughtfully completed the peels and pegged David out. The leave wasn't perfect, but David still did well to finish from the contact.
A lot of games weren't that good, I don't know why. Maybe it was the hoops, which yielded to a firm shot, but sometimes if you went for control, you got too much control. Or maybe we're not as good as we'd like to think.
The newcomer was Joe Prinold. Playing off 4, he beat one scratch player and almost beat your correspondent. I think that 4 is about the right handicap for ambitious improvers to enter A-class tournaments.
In his winner's speech Jack graciously remembered Ian Parkinson.
Jack Wicks 8/8
Duncan Hector 3/5
Simon Hathrell 3/5
David Marsh 4/7
Nick Steiner 2/5
Andrew Gregory 2/6
Bryan Harral 2/6
Eugene Chang 1/5
Joe Prinold 1/5