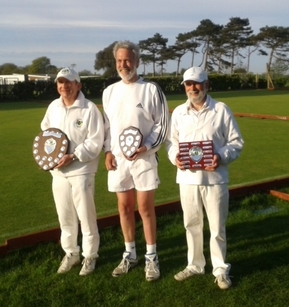 Entrants from Letchworth (and Bygrave) included David Tutt, Duncan Hector, Keith Rhodes and David Mathews but it was David Mathews, appearing in his first major tournament, who ran away with the Handicap event, winning all his three games in record time.
Congratulations David! 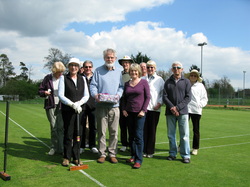 David Millman was presented with a gift to thank him for his time as treasurer of the club.
He later wrote 'I was very touched to receive the gift of the salad bowl this afternoon, thankyou very much. It was an excellent choice of gift as we make good use of such things, particularly in the summer. I have enjoyed being treasurer during a period of change and development for the club, and was quite surprised to realise, when I checked, that it was seven years.May I wish the new committee all the best.'

Quiz Night a Great Success
Our Quiz Night was attended by more than 90 keen players. As well as a very enjoyable evening it raised more than £1000 for club funds! Thanks to Sue for organising, to Jeremy for being Quizmaster and to Carol for a fantastic supper.

Latest news about the lawns

For some time now the Club has had a need for additional storage, primarily to remove potentially hazardous or dangerous items from areas which members regularly use.   New legislation will come into effect over the next couple of years requiring certain lawn treatment products, and the equipment used to apply them, to be isolated from general access. I am pleased to say that the Club has been successful in its recent planning application and a small additional shed will shortly be erected behind the existing shed at the side of Court 2.   It is of the same make and design, but slightly smaller and so should largely be hidden from normal view. When the sprayer and other equipment have been relocated we hope to be able to make the shelter more welcoming and useful.    One idea is to provide an electricity supply, meaning lights and . . . a kettle ! As soon as the weather allows, the GroundTeam will be levelling an area for the base.   We would welcome a few volunteers to help with this work, so please let me know if I can add your name to the list.   Nothing too onerous, just a couple of hours here and there. We will also be looking for a small amount of hard-core to use when levelling the base, so do please let me know if you have some old (uncontaminated) bricks, rubble, paving slabs etc. that you would like to get rid of in a good cause. The purpose of this note is to keep you informed of our plans, and to tempt a few of you into helping with some of the workload.   Please get in touch if you have any questions or concerns. Thanks, Keith
On behalf of the GroundTeam